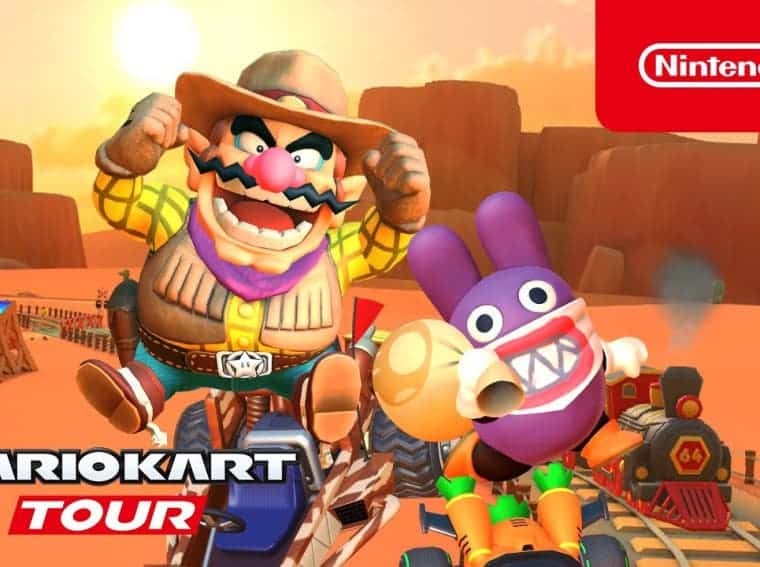 While there are rumors regarding Nintendo’s demise in the smartphone gaming business, the company keeps pushing new features for Mario Kart Tour. The game had a rough start, but it finally became something we can appreciate. Actually, it finally delivers a close to console-experience of playing Mario Kart. The company recently rolled out an update that brought interesting features like the possibility of playing it horizontally. Now, the company announced a new Wild West Tour. As the name implies, the mode will bring new scenarios, skins, racers, and challenges. Mario Kart Tour The Wild West Tour will run until August 12.

The new mode brings you to the Wild West and introduces new characters. First, you’ll be able to play with Cowboy Wario. He will be available until August 4th. After that date, he’ll be replaced by Nabbit. There’ll also be different karts and gliders available from Spotlight Pipes – Brown Offroader Kart and Rainbow Starchute Glider until August 4th. After that date, they’ll be replaced by Carrot Kart and Nabbit Oilpaper Glider until the 12th.

The company will also take the opportunity to offer Tour Gifts. It brings extra goodies for players who are Gold Pass subscribers.

When it comes to the new tracks, the event will introduce the classic Kalimari Desert 2 course from Mario Kart 64. It includes railroad tracks, massive jumps, and a terrifying sandstorm. Players will need to evaluate several elements since everything will be there to affect the race. You must be ready for some quick-time events popping out during Wild West Tour.

We’re pretty excited for the new event. Apparently, Nintendo is finally making Mario Kart Tour a decent entry in the series. The game is available for both Android and iOS platforms.