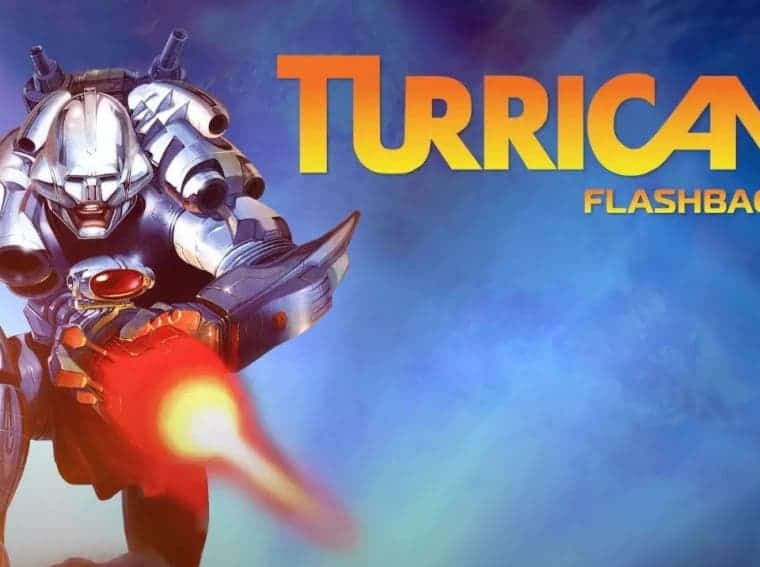 The video game world has greatly evolved in the past years. Nowadays, there are multiple trends in this segment, but nothing is getting more stars than the so-called open-world RPGs. In this segment flooded with “similar” games, it’s awesome when some developers decide to go against the curve by bringing distinct old-school gaming experiences. It becomes even more interesting when this experience has a nice appeal to nostalgia. That’s exactly the case of Turrican Flashback.

A couple of weeks ago, NIN Games announced the arrival of the Turrican Flashback Collection (PS4 / Switch). It brings games such as Turrican (Multi), Turrican 2 (Multi), Super Turrican (SNES / VC), and Mega Turrican (Mega Drive / VC). The game reached the market on January 29 through physical and digital copies. Interestingly, Turrican Flashback has been mastered by fans of the franchises and developed by renowned developers at Factor 5. It’s a studio that has great importance in the 1990/the 2000s. For those unaware, Turrican games were originally released two decades ago and now, modern players can enjoy this marvelous experience of platforming action.

We’ve been seeing anything coming from the Turrican franchise for a long time. For that reason, it’s truly amazing to receive a complete collection of old games. Could it be a teaser of a bright future? Turrican was published by Strictly Limited Games and is a classic that carries a magical essence and shows the love of developers. As above mentioned it’s a nostalgic game with all the action presented in the original titles. Each of the titles brings a lot of challenges, but unfortunately, it does not bring any kind of innovation. It’s clear that the collection developers just wanted to pay a tribute to the original titles, but they could be added some elements here and there to expand the experience.

Turrican’s games usually take place in an apocalyptic utopia, where a brave warrior equipped with heavy technological armor fights their way through challenging stages flooded with robotic threats. Apart from the futuristic setting, we can say that this was a very “common” plot in the 1990 games. Interestingly, Turrican came in an era dominated by popular franchises of the cult culture such as Terminator and RoboCop. Of course, the game does not try to be any of these franchises, it has its own original identity.

Of course, we need to say if you are waiting for a deep plot in this game full of turnarounds, you’ll be disappointed. The focus here clearly is the action. The plot only serves to illustrate, give significance to the design and atmosphere that the game has. Honestly, there is nothing wrong with that. We’re full of games with rich stories nowadays, but if you need just a plain and fun game, Turrican Flashback will fill your needs. What is so great about a man, in super armor, carrying a bunch of weapons? This, to fight aliens and robots.

Turrican Flashback brings back the characteristic design of the series

Although the story here isn’t the focus, it is secretly told through the scenarios. The developers paid attention to the scenarios, creating unique environments with challenging progression. Moreover, the music here will clearly push the players forward. I have to say that the distinct scenarios always completed with amazing soundtracks pushed me forward in this game.

Moreover, the stages are huge and full of shortcuts and different places. So if you enjoy exploring, the game will prize you. This also serves to expand the replay factor of this game. After all, you can re-play a certain stage just to explore other paths and see what they have in tow for you. You’ll need to explore, after all, certain items and prizes can ease your journey. 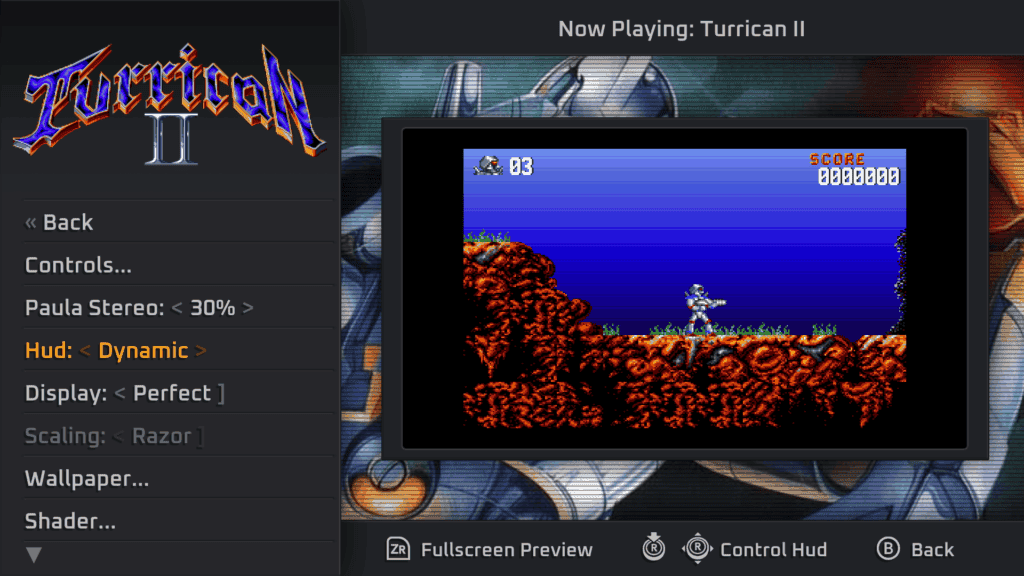 Turrican Flashback also does not disappoint in its difficulty. You’ll not see a Dark Souls-like difficulty here, but you will certainly find the difficulty of old-school games. The developers didn’t touch the original difficulty to make it easy. Instead, you will find the challenges that made this a beloved and recognized title. You will need a lot of attempts to finish each of the games in the collection. Sometimes it will not even give you time to breathe as the enemies will be jumping in your face all the time. For that reason, it’s a game marked with attempts and fails. In this process, you’ll memorize the scenarios and the enemies’ behaviors.

Some Dark Souls / Bloodborne players say that there is a unique feeling when you complete a challenge or boss in this franchise. We can say, that there is a similar feeling in Turrican. You will feel the pleasure of completing a challenge/stage after having to learn and surpass yourself.

However, this will be a quick pleasure since you will find yourself in a new stage full of new challenges and more nostalgia. 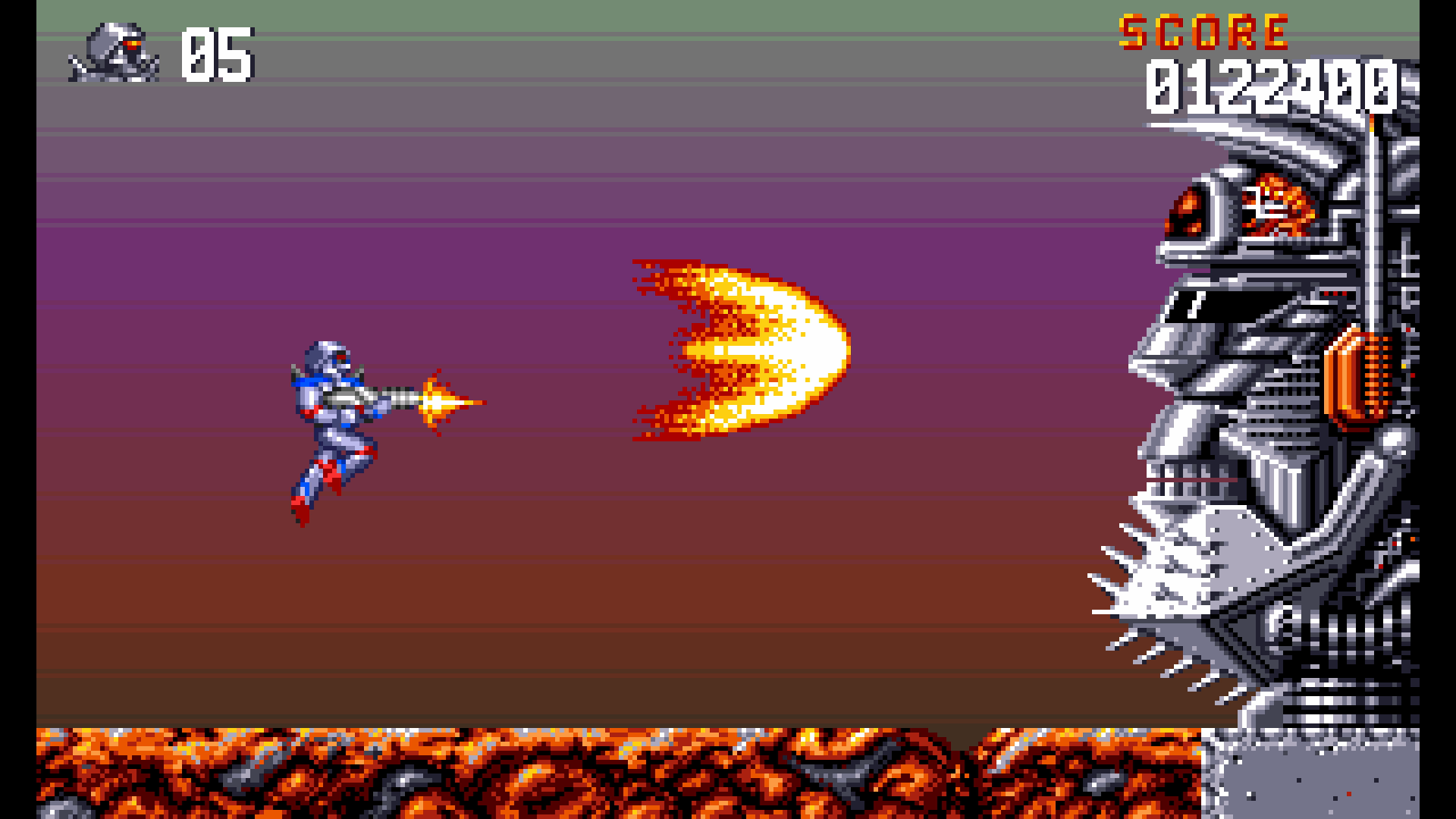 Worth noting, that Turrican Flashback brings two distinct modes – Traditional/Classic and an “Easy” mode. In the latter, you can save your progress without having to care with a possible Game Over. We can see here that the developers want to attract more players that are not used to the difficulty of 1990 games.

Turrican Flashback is a gift to loyal fans

It’s easy to understand that Turrican Flashback comes as a tribute to all those loyal fans that never forgot the franchise. The Factor 5 classic, is recognized due to its art style and soundtrack. The music comes from Chris Huelbeck and helps to build the futuristic atmosphere towards Turrican. It makes use of synth, to expand the sound effects. It’s a perfect mixture that improves the experience while playing the classics. As we mentioned above, Turrican drinks inspiration from 1990’s futuristic classics. Its art style reflects a lot of elements that we were used to seeing in the 1990s games and even movies.

Turrican crossed a milestone in the past determining new paths for games in the action genre. It was one of the first games in the action/platform genre to present interactive scenarios, providing a lot of exploration and prizes for those who explore. We can basically say, that game is a kind of ancestor for the so-called Metroidvania genre. It can even be an influence on modern third-person shooter games. Unfortunately, we’re in 2020, and if you forget the appeal to nostalgia, the game may not be much attractive for newcomers. 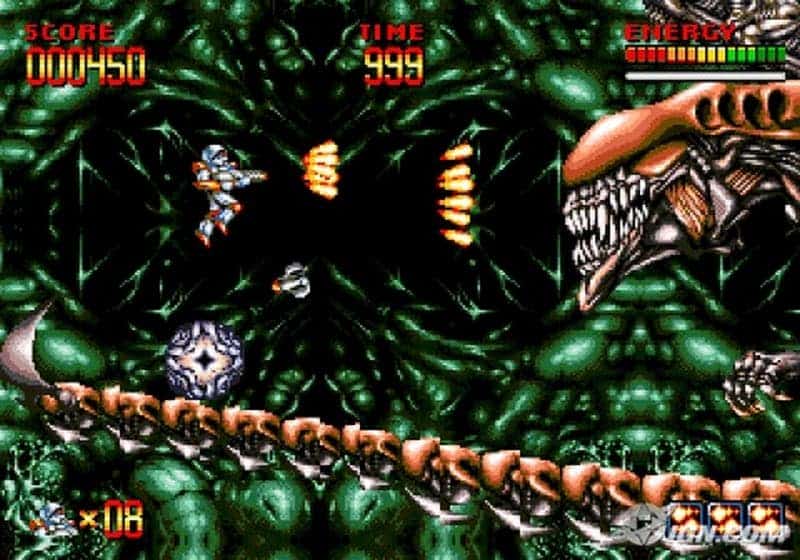 The game certainly is a gift for loyal fans and those who experience the original titles. But it may not be drawing the attention of new players. It does not bring new features and the experience isn’t modernized enough to bring the who are used with 2010/2020 platformers. We also would like to see new places or features that were probably cut from the original game. After all, even loyal fans would be pleased with some surprises.

The game is amazing and I really enjoyed my experience while playing it. However, you’ll need to be open to new experiences even if it isn’t on par with your standard tastes. While Turrican Flashback honors its user base, we’re not sure about what Factor 5 has in tow for the future of the franchise. Hopefully, this isn’t the end, and the collection will open the road for new titles, perhaps modernized.

Of course, Flashback as a collection can disappoint some of its fans. After all, the studio could include more games in this collection rather than just the aforementioned titles. Especially when each game here provides just two or three hours of gameplay. In these days of 100+ hours of games, some players will not be tempted to pay the price for a short experience. Especially newcomers.

In the end, Turrican: Flashback is just a nice gift to its fans. The game tries its best to be attractive to newcomers, but I sincerely expected more than an “easy” mode. It does not bring any new things to the industry and certainly isn’t the best of the old-school-games collection. However, everything here is brought by developers and fans that have been put their hearts to honor the game’s legacy. For all those who believed it was the end of the series, this is undoubtedly a great gift.

With iconic scenarios and a nice soundtrack, Turrican Flashback is a perfect game for players that are searching for a good challenge with a nice amount of nostalgia.