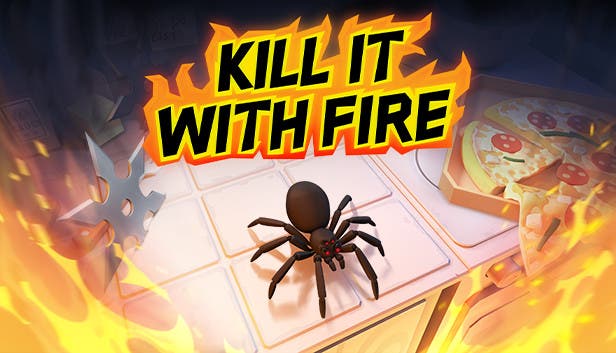 Kill It With Fire is now available for Android & iOS devices

Kill It With Fire has arrived for smartphones. The objective in this game is simple – Kill spiders! However, the objective may be simple but it is not very easy to accomplish this mission. It will take time and effort to find spiders. And once you have found them the game has given so many options to kill those spiders, you will be confused by which method you want to kill them.

The game was initially released for PC, PS4, Xbox, and Nintendo Switch. It came out last year, and it got a good amount of downloads. Especially, what matters is that the people who downloaded the game enjoyed it. Just check the Steam rating of the game. It has a 10/10 rating on Steam, and is labeled as “Overwhelmingly Positive” and now since the game is out for smartphones, more users will be able to play it. One thing that you must be wondering is “well, killing spiders is not a big deal. All you need is a slipper”. but this is not how this game is designed. You will have to cause collateral damage to accomplish your mission. You will be using weapons like guns, flamethrowers, shuriken, frying pans, and many more. This will cause a  lot of damage and that is why the game is fun to play. The game also utilizes the Realistic” fire simulation system to enhance the gameplay. Moreover, there are different types of spiders. Dozens of optional objectives. Loads of hidden upgrades. and finally an unexpected ending. I haven’t played the game, but it’s good that this game ends at one point. Well, if you want to play a game where you can relieve your stress, then Kill It With Fire might be the one to go for. It is free of cost and you can download it on Google Play Store and Apple App Store. For now, the game has received 4.1 stars on Play Store which is a good sign that the game is being liked already.

link not work for playstore