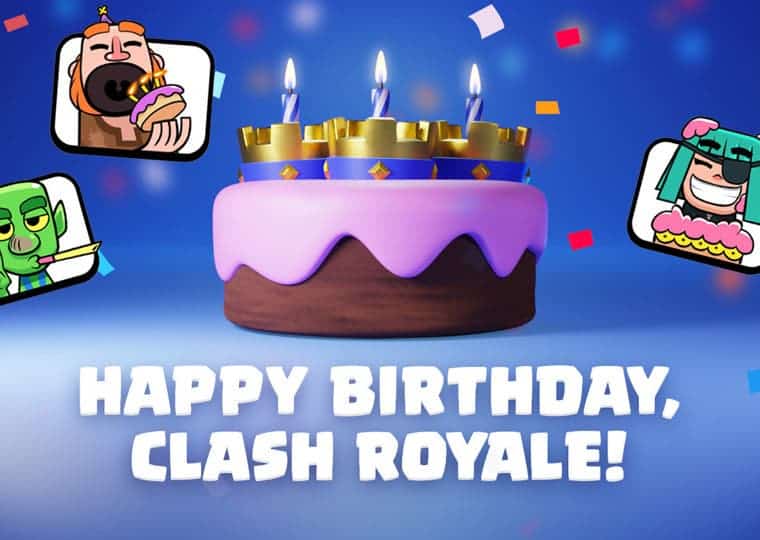 Clash Royale has launched 6 years ago back in 2016. The game was instantly a success thanks to its predecessor. Clash Of Clans needs no introduction, it is one of the most played strategy games on mobile. SuperCell expanded the Clash universe in 2016 with Clash Royale, and it didn’t take time to be successful. Clash Royale is celebrating its sixth birthday. There are in-game goodies for players that will be given on a regular basis throughout the month. You can get the rewards just by logging in to the game.

Get Birthday Emote by signing in today!

There will be tons of different rewards for the players. They are not all revealed yet. For today, the reward is a free emote. Of course, the reward is available only for a day, so make sure to log in daily. The game is known for celebrating its birthday with a bang. Last year, we saw a season dedicated to the birthday called “Birthday Royale.” In my opinion, every developer should celebrate the game’s birthday to engage players. Especially, for online games, it is vital to make the game fresh. It’s a big thing that the game is still up and running even after 6 years.

Apart from regular updates, the secret behind Clash Royale’s success has to be Clash Of Clans. Both are strategy games, but with a different style. Clash Royale sees you participating in fast-paced PVP battles while the latter features slow-paced gameplay. But what makes them both special is the integration of familiar faces. Clash Of Clans is so popular, that Clash Royale got successful in no time. And that’s due to the same characters from the CoC universe. SuperCell is not going to stop, and in fact, they are launching a wide variety of games including Clash Quest, Clash Mini, and Clash Heroes.