King is one of the most popular smartphone game developers. They are behind the iconic Candy Crush gaming franchise. Hence, anything coming from them instantly makes the hype. After dominating the puzzle genre, the developer will now be trying their luck in action. They have announced Rebel Riders, an upcoming PvP action game with multiple modes. Since the gaming market is flooded with many action games, King’s upcoming title must have a unique element in order to stand out. Let’s check out everything we know about the game in detail below. 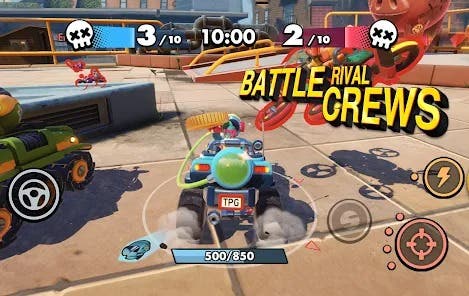 One of the key elements making this game unique is its roster. It includes action toys, stuffed animals, dolls, as well las cereal box mascots. The toys, as the name suggests are rebels and want to prove their worth after being mistreated by the owners. They will be battling in the battlezone but in a unique way. The toys take different vehicles in the battle zone. There are jeeps, tanks, and much more options. On top of this, you will be able to customize your character as well as the vehicle.

Rebel Riders is being tested in selected regions

The game features 3v3 game modes including team deathmatch, Stash the Cash, and Bomb the Base. There is also a mini-battle royale mode with just 10 players. That being said, the game is currently being tested in selected regions including Canada, Germany, Malaysia, and Indonesia. If you live in any of these places, then you are eligible to test Rebel Riders. You may check out more about the game on Playstore. The test will is scheduled until July 19th. Other people will have to wait until the official release of the game. Make sure to stick around for more gaming updates.